What is Hard Water?

Water is considered hard when it has a relatively high concentration of calcium and magnesium. Hard water received this name because it requires more soap for a good lather, making the water “hard” to clean with. In addition to making washing more difficult, hard water can cause spotting on glasses, deposits in hot water heaters, and scaling on sinks and fixtures. This can lead to reduced water pressure and shorter hot water heater life. Benefits of hard water include reduced risk of pipe corrosion and, within limits, a better taste. There is also some evidence that harder water could reduce risk of cardiovascular disease. 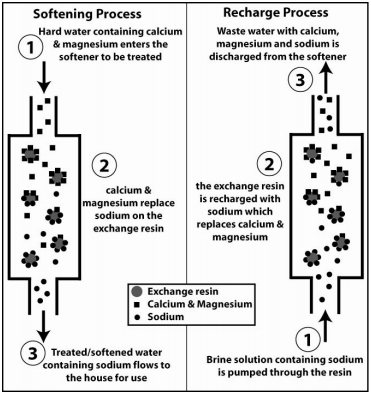 Water softening is the most common treatment for hard water. It is possible to install a water softener on a washing machine or dishwasher and some new dishwashers come with a water softener. To treat the water for the entire house a water softening system can be installed. Water softeners exchange calcium and magnesium with another ion which does not contribute to hardness. Traditionally sodium has been used in water softeners but potassium is also available. Water softening does not reduce total dissolved solids, it simply exchanges the calcium and magnesium for sodium or potassium. In some cases, people choose to soften the main household water supply, but bypass the softener with a separate drinking water tap. This allows people to receive the positive benefits of drinking hard water but avoid the negative effects of hard water on hot water heaters, washing machines, and household plumbing. Another option to avoid drinking the additional sodium from sodium softening is to install a reverse osmosis filter at the drinking water tap. Reverse osmosis can remove sodium and alleviate health concerns associated with high sodium intake.

In areas with clayey soils, the sodium discharged in the recharging process can increase the risk of septic drainfield failure. Softening with potassium is a possible alternative. Softening with sodium can also increase the corrosive nature of water by reducing concentrations of protective calcium and magnesium and increasing concentrations of highly conductive sodium. Discharge of salt during softener recharge may also disrupt the solids settling process within the septic tank. Consider routing recharge waste water away directly to the leach field.

Click on the links below to be directed to more resources.