Sprinkler irrigation and land spreading are two alternatives proposed as a means of water spreading, dispersal and achievement of "beneficial use" of saline and sodic water. Irrigation or land spreading of saline-sodic water as a utilization scheme or dispersal mechanism can be feasible. However, the requirements for management are likely to be well beyond either the achievable or strived for management in marginally productive areas or in areas where scientific irrigation water management and monitoring have not previously been used. The criteria needed to achieve sustainable soil quality and plant production using saline and sodic water are salt tolerant plant species, cropping strategies that maintain a year-round ground cover to minimize the adverse impacts of rainfall, periodic application of nonsaline-sodic irrigation waters, routine monitoring of soil solution chemistry and irrigation water quality, and periodic application of chemical amendments to salt and sodium affected soils (Oster, 2001).

As Quirk (forthcoming, 2001; personal communication, Oster, 2001) points out, any disturbance of dispersive soils at the soil surface is likely to result in rapid loss of permeability and structure. Falling water drops and overland water flow constitute "agitation." Another mechanism contributing to loss of soil hydraulic characteristics is seal formation, which can result from either 1.) physical disintegration of soil aggregates and soil compaction caused by the impact of water, especially water drops or 2.) chemical dispersion and movement of clay particles and plugging of conducting pores below the dispersed layer. To compound this problem, Ayers and Westcott (1985) and more recently Oster (2001, personal communication) reported that infiltration rates are particularly sensitive to SAR (sodium adsorption ratio) and salinity. Oster further points out that soil solution SAR and salinity are closely linked to the SAR and salinity of the irrigation water. Rainfall or irrigation with nonsaline irrigation water on soils previously irrigated with saline-sodic drainage water will lower the soil salinity at the soil surface to a greater extent than it will lower the SAR. This disproportionate lowering of the salinity will likely upset the balance between flocculation promoted by the electrolyte concentration and dispersion promoted by sodicity.

TDS (total dissolved solids) is typically correlated with EC (electrical conductivity) by well defined and extensively published references, i.e., Richards et al., 1954; Hanson et al., 1999, Bauder and Brock, 1992, and numerous others. Saline water is categorized as water with an EC >3.0 dS/m while sodic water is categorized as water with an SAR (or some permeation of an adjusted SAR) >12 (Taylor and Ashcroft, 1972; Hanson et al., 1999, Miller and Donahue, 1996; Ayers and Westcott, 1985; Suarez, 1981). Although there is considerable debate over the absolute values for acceptable limits for SAR and SARadj, there is consistent agreement that sodicity, as reflected in the SAR, is a source of significant impairment of many soils, particularly irrigated soils and soils of arid or semi-arid zone conditions and montmorillonitic or 2:1 expanding lattice clay structure (Oster, personal communication, 2001; Oster and Shainberg, 2001). The adverse impact of sodicity on dispersion of fine-earth soils is exaccerbated by arid and semi-arid zone environments where rainfall conditions of significance seldom occur during the irrigation season (Rengasamy and Sumner, 1998). In addition to the dispersive nature of sodium and soil-associated sodicity, sodium is also toxic to sodium sensitive plants at SAR/ESP in excess of SAR levels associated with exchangeable sodium percentages (ESP) of the exchange complex >15%. Correspondingly, salinity has the potential to have significant impact on plant communities, plant community sustainability, and livestock and wildlife forage compatibility. Salinity, in and of itself, can be toxic to plants at elevated concentrations (Soil Improvement Committee, 1995).

Sodium saturation and clay dispersion are frequently associated with salination. Soils leached with sodium salt solutions were found to have lower hydraulic conductivity and lesser void ratios than the same soils when leached with soluble calcium salts (Waldron et al., 1970). Correspondingly, when the soil salinity (electrolyte concentration) was maintained below a critical threshold level that is soil dependent, the hydraulic conductivity and permeability of study soils decreased as the ESP was increased, i.e., increasing percentage of the soil exchange sites saturated with sodium without a concurrent increase in soil solution electrolyte concentration results in dispersion and loss of large-diameter conductive porosity (Quirk and Schofield, 1955). McNeal and Coleman (1966) concluded that the decrease in hydraulic conductivity associated with high SAR-low EC solutions was particularly pronounced for soils with high montmorillonitic clay content, while soils high in non-swelling kaolinite and sesquioxides are somewhat insensitive to variations in solution composition with respect to loss of pore integrity.

Extensive research has been completed addressing similar issues in the Powder River watershed within the last decade. Three graduate research projects addressing impacts of elevated EC x SAR combinations in irrigation water of the Powder River basin were completed by students at Montana State University prior to extensive CBM development (Brock, 1991; Thompson, 1991, and Woodbury, 1993). Brock (1991) reported (as expected) that with respect to the predominant soils of the lower Powder River Basin, the coarser textured soils were more conducive to leaching of salts than the finer textured soils. Extended irrigation with high TDS/high SAR water resulted in soil salinization and a decrease in macroporosity. Addition of soluble sources of calcium and magnesium salts rapidly replaced the sodium adsorbed onto the soil exchange sites, but the effects were short lived.

Thompson (1991) expanded on the work of Brock (1991), concluding that irrigated alfalfa production could be maintained under a regime of high intensity irrigation with high salinity - high sodium water on medium and coarse-textured soils of the Powder River Basin. Sustainability was predicated on 1) a nearly continuous supply of water and very short periods of soil drying, and 2) well-drained soils of predominantly sandy loam, fine sandy loam, or a sandy loam phase of silt loams. However, long term irrigation resulted in accumulation of significant amounts of salt and sodium in the soils and equilibration of the soil solution saturation extract of the most coarse-textured soils with the irrigation water salinity/sodicity. The salinity and sodicity of the finer-textured soils elevated to levels 1.5 to 2.0 times greater than the salinity or sodicity of the irrigation water over time.

Following up on the work of Thompson, Woodbury (1993) determined that these same soils, when irrigated for extended periods of time with water of elevated salinity and sodicity, exhibited decreased macro-porosity and reduced soil hydraulic conductivity. Woodbury (1993) was able to successfully reverse the trend in reduction in macro-porosity by the addition of calcium chloride, thereby increasing the soil solution electrolyte concentration and the available supply of calcium to displace sodium on the exchange complex. However, the net result was significant elevation of the sodium concentration of the soil solution which subsequently caused an elevation in sodium concentration of drainage water. Additional studies recently reported by Bauder and Brock (2001) subtantiate the findings reported by Woodbury (1993).

An associated study reported by Bauder et al. (1992), investigating the relationship between soil solution EC x SAR combinations and alfalfa seedling emergence and survival, demonstrated that alfalfa seedling mortality ranged from as low as 25% to as high as 85%, depending on EC x SAR combination. Pre-treatment of seedbed soils and establishment of irrigation with even intermediate level EC x high SAR water on fine and intermediate textured soils of the lower Powder River Basin resulted in seedling death as high as 85%. They essentially concluded that relatively salt sensitive crops like alfalfa, which are potentially of significant economic value in the Powder River basin, would be precluded from establishment on all but the most coarse-textured soils which had previously been irrigated with water of high TDS (1650 ppm) x high SAR (9.6). They further concluded that significant soil conditioning and leaching of salts would be required to ameliorate or mitigate the effects of previous irrigation to the point of being able to establish economically viable alfalfa plantings. An interactive relationship between EC x SAR whereby the dispersive nature of sodicity is mediated is well known in the soil science profession and has been previously reported numerous times in the literature.

Knowledge of this relationship is currently being capitalized on by CBM developers, consultants, and others interested in promoting the advancment of CBM development. However, the sensitivity of the EC x SAR interactive effect to clay type, soil chemistry, and soil textural characteristics is often overlooked and will have significant adverse ramifications if overlooked during the CBM development process. In simplicity, the floccuation characteristics associated with elevated EC (Mace and Amrhein, forthcoming, 2001; Rengasamy and Sumner 1998) of the soil solution is minimal at best in the case of soils predominated by 2:1 type clay particles, i.e., montmorillonites. Montmorillonites, as previously noted, represent a significant base of the soils found in the development areas (Gallagher, 1985; Meshnick et al, 1977). 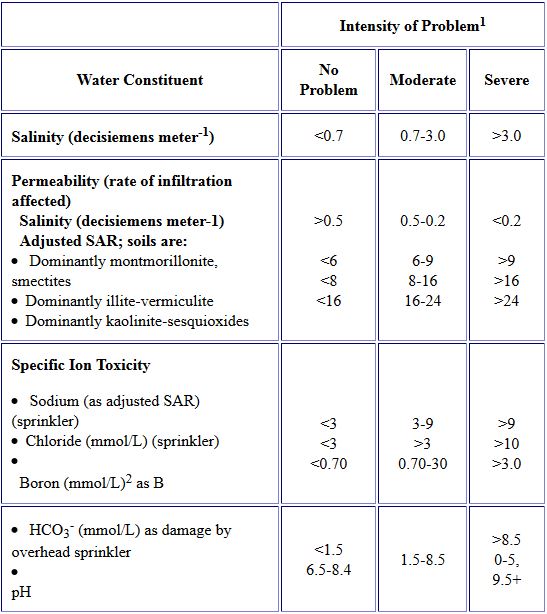 Source: Modified from http://www.fao.org/DOCReP/003/T0234e/T0234e00.htm
1Based on the assumption that the soils are sandy loam to clay loams, have good drainage, are in arid to semiarid climates, that irrigation is sprinkler or surface, that root depths are normal for soil, and that the guidelines are only approximate.
2Assumes molecular weight=molec weight (one charge) because it is slightly ionized or nonionized

In addition, due to the alluvial nature of the landscape and the well-defined ephemeral stream channels created by geologic erosional processes and the marine sediment parent material of the soils of these areas, much of the surficial soil of the stream corridors and ephemeral streams is fine-textured, depositional silts and clays.

Quirk (circa 1950) was the first to report on changes in the rate of water percolation through soil as a result of changing the soil exchangeable sodium percent (ESP) and the salinity of the percolating solution (Quirk and Schofield, 1955). Reeve (1960) expanded on the work of Quirk and Schofield to show that as the ESP increased, higher levels of soil salinity were required to maintain hydraulic stability of the soil. Reeve's work also illustrated that for a given soil, as the soil solution salinity level is increased with the ESP held constant or at zero, i.e., no exchangeable sodium on the soil exchange sites, soil hydraulic conductivity will increase. A similar set of studies by McNeal and Coleman (1966) substantiated the conclusions of Quirk and Schofield (1955) that a soil classified as "irrigable" based on hydraulic characteristics will retain its hydraulic properties if irrigated with saline water.

Quirk defined a threshold salinity concentration (TSC) as that which caused a 15 percent reduction in the rate of waterflow through the soil due to what was apparently deterioration of soil structure. At this point, physical deterioration and migration of clay particles was visually observed. Quirk further reported that this threshold concentration increased in direct proportion to the ESP. As both Quirk (2001, reported as forthcoming by Oster, 2001) and Mace and Amrhein (forthcoming 2001, working independently) report, several mechanisms interact to result in a decrease in a soil's ability to transmit water, those being: soil swelling and pore blockage, soil aggregate destruction, clay particle deflocculation and dispersion.

Oster (2001), on the basis of Quirk and Schofield (1955) and later McNeal and Coleman (1966), propose that water with salinities ranging from 6 to 20 dS/m and SARs ranging from 6 to 35 can be used for irrigated forage production under appropriate soil and management conditions. Those conditions are irrigation of crops with tolerances to these salinity and sodicity levels and use of cropping and soil amendment strategies that prevent the development of adverse soil physical properties. With respect to irrigation with saline-sodic water, as Oster (2001) points out, it is possible to maintain soil permeability by choosing the appropriate salinity level in the irrigation water, even at excessively high sodicity levels. He further proposes irrigation waters with high salinities (up to 20 dS/m) are more than adequate to maintain or enhance existing hydraulic conductivities. He cautions however that rainfall, or irrigation with nonsaline waters poses a significant potential of leading to crusting, poor tilth, ponding, and poor aeration on lands previously irrigated with saline-sodic waters.

Quirk, J.P. 2001. The significance of the threshold and turbidity concentrations in relation to sodicity and microstructure. Aust. J. Soil Res. In press.