Basics of Salinity and Sodicity Effects on Soil Physical Properties

Introduction to Salinity and Sodicity

Saline irrigation water contains dissolved substances known as salts. In much of the arid and semi-arid United States (including Montana), most of the salts present in irrigation water are chlorides, sulfates, carbonates, and bicarbonates of calcium magnesium, sodium, and potassium. While salinity can improve soil structure, it can also negatively affect plant growth and crop yields.

Sodicity refers specifically to the amount of sodium present in irrigation water.Irrigating with water that has excess amounts of sodium can adversely impact soil structure, making plant growth difficult. Highly saline and sodic water qualities can cause problems for irrigation, depending on the type and amount of salts present, the soil type being irrigated, the specific plant species and growth stage, and the amount of water able to pass through the root zone.

4. Relationships Between Salinity and Sodicity and Soil Physical Properties

Salinity becomes a problem when enough salts accumulate in the root zone to negatively affect plant growth. Excess salts in the root zone hinder plant roots from withdrawing water from surrounding soil. This lowers the amount of water available to the plant, regardless of the amount of water actually in the root zone. For example, when plant growth is compared in two identical soils with the same moisture levels, one soil receiving salty water and the other receiving salt-free water, plants are able to use more water from the soil receiving salt-free water. Although the water is not held tighter to the soil in saline environments, the presence of salt in the water causes plants to exert more energy extracting water from the soil. The main point is that excess salinity in soil water can decrease plant available water and cause plant stress.

Soil water salinity is dependent on soil type, climate, water use and irrigation routines. For example, immediately after the soil is irrigated, plant available water is at its highest and soil water salinity is at its lowest. However, as plants use soil water, the remaining water is held tighter to the soil and becomes progressively more difficult for plants to obtain. As the water is taken up by plants through transpiration or lost to the atmosphere by evaporation, soil water salinity increases because salts become more concentrated in the remaining soil water. Thus, evapotranspiration (ET) between irrigation periods can further increase salinity. (Increased salinity due to ET is rarely taken into account in salinity charts.)

Soil water salinity can affect soil physical properties by causing fine particles to bind together into aggregates. This process is known as flocculation and is beneficial in terms of soil aeration, root penetration, and root growth. Although increasing soil solution salinity has a positive effect on soil aggregation and stabilization, at high levels salinity can have negative and potentially lethal effects on plants. As a result, salinity cannot be increased to maintain soil structure without considering potential impacts on plant health.

3. Effects of Sodium and Sodicity on Soil Physical Properties

Sodium has the opposite effect of salinity on soils. The primary physical processes associated with high sodium concentrations are soil dispersion and clay platelet and aggregate swelling. The forces that bind clay particles together are disrupted when too many large sodium ions come between them. When this separation occurs, the clay particles expand, causing swelling and soil dispersion.

Soil dispersion causes clay particles to plug soil pores, resulting in reduced soil permeability. When soil is repeatedly wetted and dried and clay dispersion occurs, it then reforms and solidifies into almost cement-like soil with little or no structure. The three main problems caused by sodium-induced dispersion are reduced infiltration, reduced hydraulic conductivity, and surface crusting. 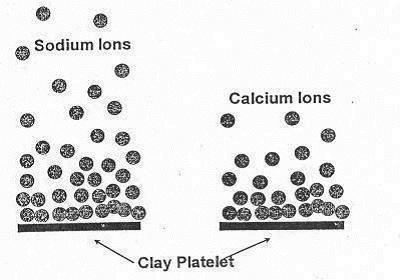 Infiltration
Soil dispersion hardens soil and blocks water infiltration, making it difficult for plants to establish and grow. The major implications associated with decreased infiltration due to sodium-induced dispersion include reduced plant available water and increased runoff and soil erosion.

Hydraulic Conductivity
Soil dispersion not only reduces the amount of water entering the soil, but also affects hydraulic conductivity of soil. Hydraulic conductivity refers to the rate at which water flows through soil. For instance, soils with well-defined structure will contain a large number of macropores, cracks, and fissures which allow for relatively rapid flow of water through the soil. When sodium-induced soil dispersion causes loss of soil structure, the hydraulic conductivity is also reduced. If water cannot pass through the soil, then the upper layer can become swollen and water logged. This results in anaerobic soils which can reduce or prevent plant growth and decrease organic matter decomposition rates. The decrease in decomposition causes soils to become infertile, black alkali soils.

Surface Crusting
Surface crusting is a characteristic of sodium affected soils. The primary causes of surface crusting are 1) physical dispersion caused by impact of raindrops or irrigation water, and 2) chemical dispersion, which depends on the ratio of salinity and sodicity of the applied water.

Surface crusting due to rainfall is greatly enhanced by sodium induced clay dispersion. When clay particles disperse within soil water, they plug macropores in surface soil by two means. First, they block avenues for water and roots to move through the soil. Second, they form a cement like surface layer when the soil dries. The hardened upper layer, or surface crust, restricts water infiltration and plant emergence.

4. Relationship Between Salinity and Sodicity and Soil Physical Properties (EC/SAR)

The relationship between soil salinity and its flocculating effects and sodicity and its dispersive effects influence whether or not soil will stay aggregated or become dispersed under various salinity and sodicity combinations. As irrigation water with low salinity is applied to the soil by irrigation or rainfall, this water flows into the spaces between clay particles (micropores). If salinity of the applied water is low relative to soil salinity, swelling and dispersion of clay particles results. In contrast, irrigation water with higher salinity than the soil tends to cause particles to stay together, maintaining soil structure.

More than fifty years of research have been conducted to determine the relationship between salinity (EC) and sodicity (SAR) of irrigation water and its affects on soil physical properties. This relationship is now understood well enough to make accurate predictions of how specific soils will behave when irrigated water containing different levels of salts and sodium. The main concerns related to the relationship between salinity and sodicity of irrigation water are the effects on soil infiltration rates and hydraulic conductivities.

The Swelling Factor
The ratio of salinity (EC) to sodicity (SAR) determines the effects of salts and sodium on soils. Salinity promotes soil flocculation and sodicity promotes soil dispersion. The combination of salinity and sodicity of soils is measured by the swelling factor, which is the amount a soil is likely to swell with different combinations of salinity and sodicity. Essentially, the swelling factor predicts whether sodium-induced dispersion or salinity-induced flocculation will more greatly affect soil physical properties. 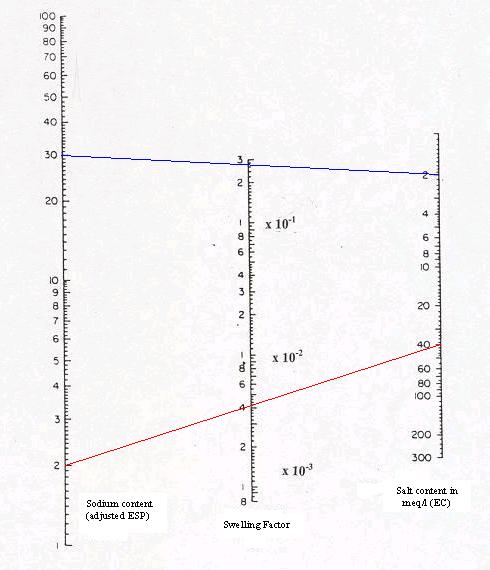 Factors such as climate, soil type, crop and plant species and management practices also need to be accounted for when determining acceptable levels of salinity and sodicity of irrigation water. Rainfall also plays an important role in the relationship between salinity and sodicity and soil physical properties. Intense rainfall can flush salts beneath the root zone, but often cannot significantly reduce amounts of sodium bound to the soil. Therefore, rainfall can reduce the potential for soil aggregation from salts and increase the likelihood that sodium-induced dispersion will occur. 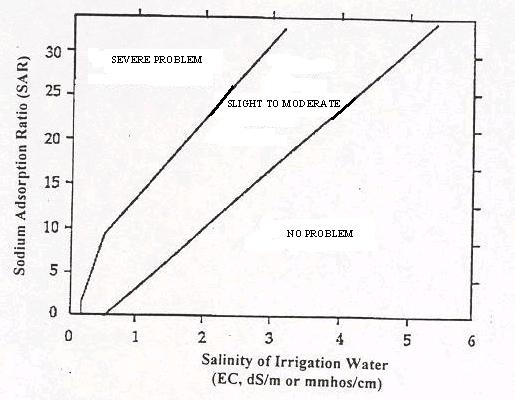 5. The Role of Soil Texture

Soil texture plays an important role in all aspects of irrigated agriculture, and the role of soil texture with respect to effects of salinity and sodicity is no exception. Soil texture helps determine how much water will be able to pass through the soil, how much water the soil can store, and the ability of sodium to bind to the soil.

Because they are composed of small particles, clay soils can hold more water and are slower to drain than course textured soils. Smaller particles can pack closely together, block the spaces between particles and prevent water from passing through. Sand particles are larger and therefore, have larger pore spaces for water to pass through. Under normal irrigation practices, sandy soils will naturally be able to flush more water through the root zone than clay soils. The end result is that sandy soils can withstand higher salinity irrigation water because more dissolved salts will be removed from the root zone by leaching.

Another important aspect of soil texture has to do with surface area. Because of their tiny size, a given volume of clay particles has far more surface area than the same volume of a larger sized particle. This simply means that clay soils are at a greater risk than course textured soils for excess sodium to bind to them and cause dispersion. Sands have larger particle sizes, resulting in less surface area; correspondingly, they cannot accept as much sodium as clay particles.

The three main clay types are montmorillonite, illite, and kaolinite clays. On the microscopic scale, each of these clays has a different lattice structure, i.e., different building blocks. This directly affects the ability of sodium to bind to each type. Basically, the more sodium a certain type of clay is able to hold, the more infiltration and hydraulic conductivity will be reduced. Montmorillonite clays are affected by sodium the most, while kaolinite is least affected. This same pattern is also true for the swelling factor. Montmorillonites are the most prone to swelling and dispersion, whereas kaolinites are the least likely to swell and disperse.

4. Ayers, R.S. and K. Tanji. 1981. An application from Ayers and Westcot's 1985 "Use of treated municipal wastewaters for irrigation." FAO Irrigation and Drainage Paper No. 29 Rev. 1. Originally published as an ASCE 1981 Water Forum Conference Proceedings.

19. Henderson, D. W. 1981. "Influence on Soil Permeability of total salt concentration and sodium in irrigation water." A conference of biosalinity, the problem of salinity in agriculture: a joint conference of Egyptian, Israeli, and American Scientists. Water Resources Center Contribution, No. 14. University of California, Davis. 51-53.